The Independent National Electoral Commission (INEC) has suspended the presentation of certificates of return to candidates of the All Progressives Congress (APC) in Zamfara state.

The electoral commission disclosed this in a tweet on Tuesday. 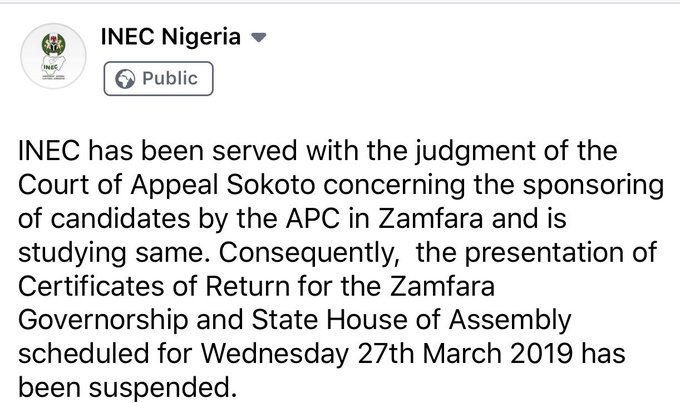 INEC said it has been served with a judgement from the court of appeal in Sokoto and is currently studying it.

“Breaking: INEC has been served with the judgment of the Court of Appeal Sokoto concerning the sponsoring of candidates by the APC in Zamfara and is studying same,” the electoral commission tweeted.

“Consequently, the presentation of Certificates of Return for the Zamfara Governorship and State House of Assembly scheduled for Wednesday 27th March 2019 has been suspended.”

On Monday, the appeal court set aside a verdict of a Zamfara high court that asked INEC to recognise the candidates of the faction of Abdulaziz Yari, governor of Zamfara,

However, the governor said the court did not tamper with the party’s primary polls in the state.